Upon its release, I immediately downloaded and installed Google Chrome. After trying for a while, I found out that Java Applet is not yet supported. It was a big NO-NO since I frequently use DBS’ Internet Banking, which uses secure Java applet.

So today I give Chrome another try (for obvious reason, system reinstall). Apparently now Java plugin is supported by Google Chrome. You could download the JRE (Java Runtime Environment) HERE.

So I installed the beta JRE, restarted Chrome, then curiously visited DBS’ Internet banking site. When the page loaded, I noticed that the JRE icon is now loaded in Windows’ System Tray. But it seems the plugin doesn’t work as shown below 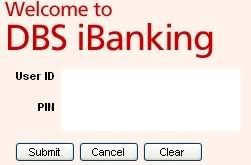 Then I used that old trick, something similar to banging your TV when the picture got blurry. I refreshed the page by pressing F5. Click continue, then Voila! It the login page is now displaying properly.

UPDATE (15 Oct 2008):
I can’t use the transfer functionality. The session was abruptly ended.

Howdy! I'm Hardono. I am working as a Software Developer. I am working mostly in Windows, dealing with .NET, conversing in C#. But I know a bit of Linux, mainly because I need to keep this blog operational. I've been working in Logistics/Transport industry for more than 11 years.